THE BOY THAT LOVED RABBITS - FACING MY SHADOWS 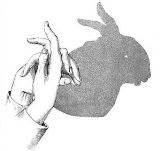 This short story is the journey of discovery of a little boy’s love for rabbits and his darkest shadows, and a path of healing through forgiveness and acceptance, to his biggest gift.

It was in 1963, on a beautiful crisp clear morning in Bellville, South Africa that a mother returned home with her three sons after walking to the local Post Office to post a letter to her family in England. After putting the youngest son in his play pen, strangely tired, she lay down and asked her eldest son to read to her. She had been suffering from pains in her legs and the walk to the Post Office now made the pain worse. As she nodded off to sleep he used the book to cool her, fanning her as she seemed uncomfortable and hot. Silently she fell asleep never to awaken again. She had suffered a heart attack from the blood clot in her leg. Unaware the boy continued to fan his mother.

Figure 1; the little boy that loved rabbits mom
The second eldest son was sitting in the lounge on the floor using the sun light streaming in through the window to make finger shadows of a rabbit on the wall. His mother had taught him to make finger shadows on his bedroom wall. He was afraid of the dark and as he loved rabbits this was always his favourite finger shadow and helped him not to feel alone in the dark.
In no way did the little 4 year old boy that loved rabbits know that on this day events would be set in motion causing his entire life to take a direction that would cause the shadow of rabbits to become his darkness.
Ambulance men in uniform, priests, sirens, a funeral, family and friends visiting and a father in mourning: - The significance of these things couldn’t be understood by the little boy that loved rabbits. Questions about where his mother was and when she would come and read him stories and tuck him into bed again, answered with stories of Jesus having taken her away as he needed her more than the little boy did. But I need her too! Please Jesus send her back you have had her long enough. Sadness, sorrow and change! Dear Jesus please, just once more, allow her to come read me a bedside story and tuck me in? I’ll never ask again if you only let her enter my room one more time.

Figure 2 from right to left, the little boy that loved rabbits with his baby brother Gary, and his eldest brother Peter.
Then one Sunday dad seemed happier and told the boy that today he would take him and his brothers to visit some real rabbits. We were the only people at this big place that had rabbits. Dad took us into the back garden and there they where is a wooden rabbit hutch. We had brought carrots to feed the rabbits, trilled, exited and giggling as there little noses wiggled when they sniffed and ate the carrots.

Figure 3; from left to right, the little boy who loved rabbits with his father and youngest brother meeting the rabbits at Marsh Memorial Homes.
The father asked if the little boy that loved rabbits would like to live here where the rabbits lived and in utter disbelief he answered: “Really dad can, can we, can we please?” Then I can always feed the rabbits.
The boys where shown to a large dormitory with rows of beds and father showed them that he had already packed a suitcase with all their belongings. They happily placed their possessions in the cabinets and cupboards next to the beds allocated to them. Father said he had to leave the boys and promised that he would come to visit on weekends when he could. As the day continued more and more boys arrived and the beds and cupboards became fuller and fuller. 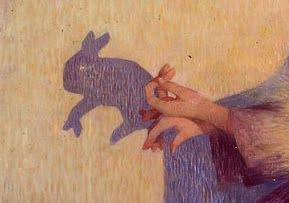 The little boy that loves rabbits is a big man now; he still loves rabbits but never makes shadows of rabbits on the wall anymore.
The shadow of this man remains hidden from himself and others as throughout his life he has used illness to find love and compassion. Controlled and suppressed he has learnt to successfully hide his darkest feelings, his deepest thoughts and darkest shadows. Yet he has used a natural empathy for others that suffer and are ill or in pain. He has reached out to many people feeling the reality of their pain. While he hides his own pain, he has tirelessly fought to protect his shadows from revealing themselves to others. He has suffered many illnesses, been diagnosed with a malignant melanoma, now living with HIV he has become a champion helping many to come to terms with this dark, dreaded disease. Not aware that through his unconscious mind he has attracted these diseases to himself.
Yet only today, has he learnt that the very shadow of his entire life has been his greatest gift. The shadow he has spent so much energy hiding has been the universes purpose for his life.
Today I embrace my shadow; my name is Alan Brand, the author of the book Positively Alive, the Group Wellness Manager of a large South African corporate company. I have counselled and helped many to move from the darkness of HIV into acceptance. I continue to dedicate my life to teaching others to come to terms with being HIV positive, living with chronic diseases, battling with cancer and emotional pain. I acknowledge my shadow; it is my greatest gift and no longer controls and hurts me. I step forward and took the lead in creating a support network for HIV + gay men in South African. I forgive myself for bringing harm to my body and for attracting hurt and pain in my life as I now learn to embrace my shadow. Without the experiences of my darkest shadows I could never have had the ability, the empathy and strength to stand up and help others to find the shadow in their own lives.
I have continue to walk the path of illness, annually suffering more and more health issues not aware that subconsciously I am attracting these illnesses to myself as it has become my life’s experience. Today I set my shadow free; I hold it high and reveal it to all to see. I forgive and embrace by shadow and accept that, that which I have been so scared to reveal has become my greatest gift.
I am today facing the little boy who loved rabbits; I am facing the terror of loneliness, despair, and abandonment. I forgive Jesus for “needing” my mother at a time when I needed her so much more. I forgive my father for taking me to see rabbits and leaving me in an orphanage, I forgive myself for seeking illness as my only means to find comfort and love. I embrace my higher purpose, my heroic self; I reveal my darkness and have overcome my shadows. I forgive not because I condone or seek to give these events or the people responsible the power or joy of my forgiveness, my forgiveness is selfish. I need to forgive as the only means to release myself from the pain caused and experienced. Through forgiveness I set my soul free and can heal.
The journey continues as I walk a path of healing, living and thriving with HIV and using my shadow self; to understand the pain of others I will continue to learn how this shadow has given me the power to reach the greater purpose of my life.
I seek to stop the need to call pain and illness into my life as my means to find comfort and protection. The adult man now meets the little boy, who loves rabbits, and lifts him into his arms, embraces him lovingly allowing him to life in harmony with his shadows.